The return trip to Ghandruk from Chhomrong involved another day trek and many more eventful experiences with the horses. Despite a few difficulties, the team managed to make it back, albeit bruised and battered, and settled in to the small village for our last clinic of the trip.

Despite being quite small, the health clinic in which we set up our dental camp was arguably the most organised and equipped space we’d had so far and there was even already a portable dental chair available for use. Being accustomed to quickly packing and unpacking our equipment, the team managed to pull together the clinic within the morning, and we were ready to start the final leg of our trip. 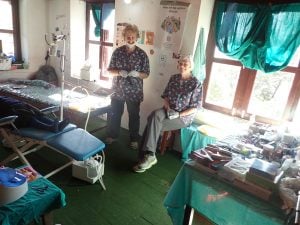 Our days in Ghandruk tended to start a lot later than in the other villages, with patients generally not arriving until 10 or 11 in the morning, and we would work until about 4 or 5 in the evenings. After eventually settling in to the clinic and getting used to the space, the first few days ran quite smoothly. Unfortunately, we hit a bit of a roadblock on the second-last day when the power suddenly dropped out at the clinic. This limited us to only be able to do extractions (although there was no shortage of these to do) until the power came back on. As always, the team powered through (excuse the pun) and eventually we regained electricity. 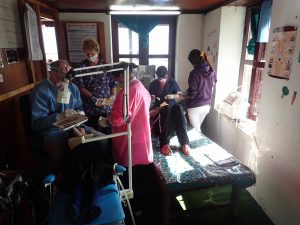 Dentists and helpers hard at work (when the electricity was working!)

Overall we treated 113 patients and carried out 115 fillings and 88 extractions in Ghandruk. We saw people both from the village and from around the area – most of which had travelled long distances by foot to see us. The people of Ghandruk were very welcoming and their hospitality towards us was very generous and heart-warming.

On the final day, the locals held a beautiful farewell ceremony for the team and hopes for the continued relationship with the Ghandruk village in the future were expressed. 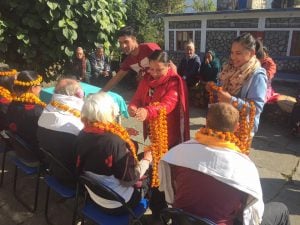 Draping hand-sewn chains of flowers is a Nepalese tradition 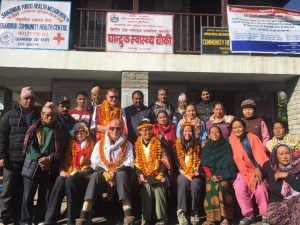 The dental team and locals of Ghandruk

Throughout the 11 day clinic we managed to treat an astounding 328 patients, carry out 290 fillings and 269 extractions. We would like to thank everyone who was involved in the trip, the helpers and the people who supported us from home. It was an amazing experience and will definitely not be the last!